The bisabolane sesquiterpenes, which have been isolated from different natural sources, are an important class of compounds. They exhibit a wide range of biological activities. They have a benzylic stereogenic centre, carrying a methyl group at this position. Among the major group of bisabolane sesquiterpenoids, curcumene is an aromatic compound, which has been widely studied. (S)-(+)-curcumene is a constituent of the essential oil from the rhizomes of Curcuma aromatica and is an odour component of distantly related corals. A new application of curcumene has been described as insecticide, repellent, and insect feeding deterrent. For this reason, the synthesis of this compound has been the subject of considerable interest during the past 15 years and several syntheses of the enantioenriched (R)-(-)-curcumene have been reported. In this review, we focus the attention on the recent syntheses and applications of this natural compound. 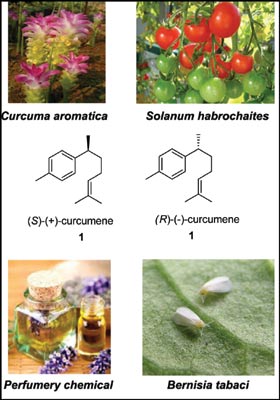