Background: One-pot reactions have gained considerable and wide range of interests in the field of chemistry due to their simplicity and economy. Comparing to the step-by-step reactions that involve the formation of individual bonds for a given target product, the greatest attribute of one-pot reactions, is the formation of several bonds in one-pot operation without intermediate isolation, reaction condition changing and further reagents adding.

Objective: We developed an one-pot, rapid, simple and eco-friendly synthetic strategy for benzothiazines, benzothiazoles and benzothiazpines through the interaction of o-aminothiophenol with ketones, nitriles and chalcones, respectively. Method: A mixture of o-aminothiophenol ketones, nitriles and chalcones was refluxed or stirred at room temperature in glacial acetic acid containing a catalytic amount of concentrated H2SO4 for 3h. Then, the resulting precipitate was collected by filtration, washed with water and crystallized from the appropriate solvent. Results: The interaction of o-aminothiophenol with aromatic and aliphatic ketones containing active -hydrogens afforded the corresponding 2H-benzo[1,4]thiazines and 4H-benzo[1,4]thiazines, respectively. Similarly, the cyclic ketones afforded the corresponding tricyclic compounds. Treatment of o-aminothiophenol with nitriles under the same reaction condition gave benzo[1,3]thiazoles. Further, cyclocondensation with chalcones under the same reaction condition at room temperature yielded the corresponding benzo[1,5]thiazepines. The reaction mechanism was investigated and the structures of all new compounds were elucidated using spectral analysis. Conclusion: An efficient, simple and environmentally friendly synthesis of benzothiazines, benzothiazoles and benzothiazepines in one-pot synthesis has been developed. With this catalytic reaction, a very cheap sulfuric acid was used as a catalyst. 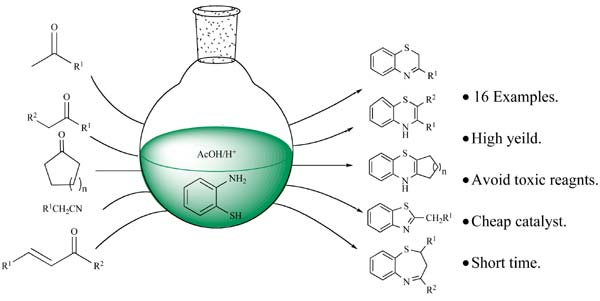