Background: In 1996, the Nobel Prize in Chemistry was awarded jointly to Robert F. Curl Jr., Sir Harold W. Kroto, and Richard E. Smalley for their discovery of fullerenes. This ignited the research enthusiasm on the fullerene and lasted for two decades. However, reactions for modifying the surface of fullerene were not summarized completely although a great deal of fullerene derivatives had already been synthesized via the modification on the fullerene.

Objective: Presented herein was an overview on reactions that were able to bridge other structural moieties onto the surface of the fullerene.

Conclusion: In principle, [1+2], [2+2], [3+2], and [4+2] cycloaddition together with oxidative nucleophilic addition functioned as the promising reactions for modifying the fullerene. The methylene in malonic acid, the nitrogen atom in azide as well as other methods for producing carbene provided the single atom (expressed by “1”) for the [1+2] cycloaddition (the “2” represented the C=C in the fullerene). The strategies for generating azomethine ylide as the 1,3-dipole (expressed by “3”) were able to furnish a five-membered nitrogen-fused heterocycle onto the fullerene via the [3+2] cycloaddition, while 1,3-dienes (expressed by “4”) were capable of appending a six-membered ring onto the fullerene via the [4+2] cycloaddition, which was also called Diels- Alder reaction for opening the surface of the fullerene. Finally, the nucleophilic additions of organolithium and Grignard reagent were performed on the fullerene. As a result, some potential nucleophiles such as hydroxyl and amino groups were bridged with fullerene by a single bond. Although a large number of fullerene derivatives were prepared, the synthetic protocols were still limited within the aforementioned reactions. 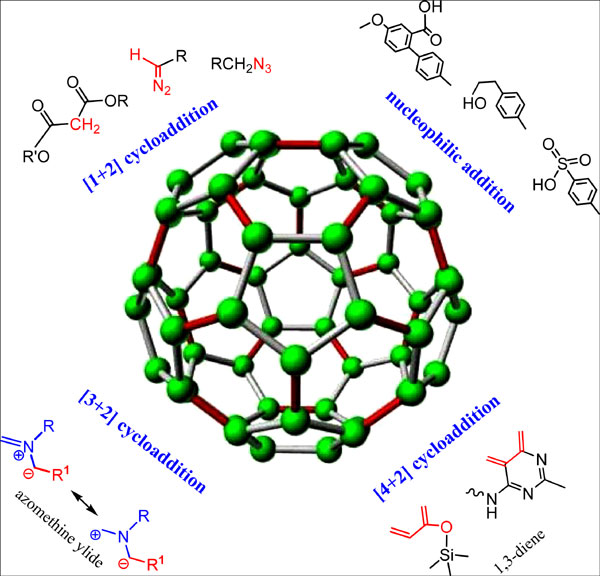