Finding the Starting Point for Mode-of-Action Studies of Novel Selenium Compounds: Yeast as a Genetic Toolkit


Background: As a chalcogen selenium has an interesting role in biology e.g. when it replaces sulfur in the amino acid cysteine, giving selenocysteine, which has an essential role in mammalian redox metabolism, being an essential part of the active site of mammalian glutathione peroxidase enzymes. Like other chalcogens selenium has several formal oxidation states and selenium compounds can interact with the cell’s redox system, which must be tightly regulated for cell survival. Thus, selenium compounds can be physiologically active in cells and have potential as tools to investigate cell biochemistry and physiology and, depending on their mode of action, as therapeutic substances in medicine.

Methods and Results: This article aims to show the potential that baker's yeast (Saccharomyces cerevisiae), a single-celled organism, offers as a model system for mode-of-action studies for novel and already known selenium compounds of potential therapeutic and biotechnological interest. For this purpose, sodium selenite (Na2SeO3) as an example test compound has been used in a selection of screening procedures to identify genes potentially involved in cellular responses. For example, the glutathione reductase gene seems to be important to protect cells against Na2SeO3.

Conclusions: The article is aimed at chemists and hopes to introduce and demystify the biology behind the common tests used with yeast. It is not intended to be an exhaustive treatment of yeast biology and much is missing, which would be found in a comprehensive practical manual, but it is hoped that it will be an introduction for scientists reading outside their specialization and helps making them aware of useful techniques for their own research. 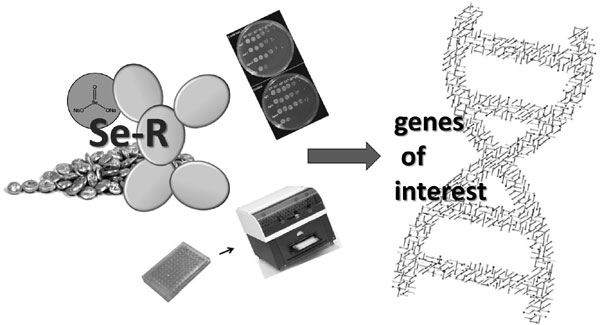