Tales of the Unexpected in Synthesis of Polyfunctional Heteroaromatics


Background: Our research group has a longstanding interest in the synthesis of novel functionalized heteroaromatic compounds, and the development of new methods for this purpose. During our ongoing investigations, we recently had an instance to check the reproducibility of some published results concerning the chemistry of arylhydrazonals, enamines and other functionally substituted carbonyl compounds. This work has led to the discovery of some new rearrangements, and the revision of the structures originally assigned to several molecules.

Objective: This review surveys some correction of several erroneous reports that have appeared in the literature, and presents some interesting new rearrangements discovered in the course of investigating older reports.

Results: The crystallographic studies revealed that the condensation of arylhydrazonals with active methylenenitriles yields arylazoniconates rather than pyridazenones as previously reported. Additionally, phenathylthiocyanate reacts with malononitrile to afford thiazoles rather than the previously reported condensation with the carbonyl group. In another example, the reaction of phenethylmalononitrile with hydrazine yields pyrazolopyridazenes rather than phenacylpyrazol-3,5-diamine. In yet another case, several interesting Dimrothtype rearrangements were observed when malononitrile was condensed with enaminones, contradicting earlier reports. Unexpectedly, these enaminones underwent self-trimerization to yield 1,3,5-trisubstituted benzenes under certain conditions. Enaminonitriles also undergo interesting and novel Dimroth rearrangements when reacted with cyclohexanedione or dehydroacetic acid derivatives.

Conclusion: We have shown that the structures of several complex heterocyclic compounds that have been reported in the literature over the last 50 years were incorrectly assigned, possibly because the authors who originally reported them were using substandard or outdated analytical equipments. 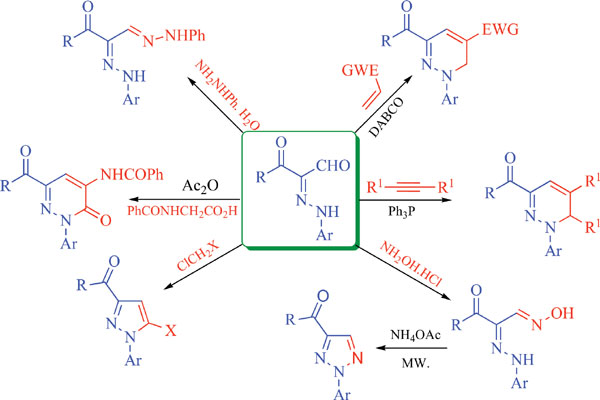