Copper Catalysts in the Synthesis of Five-membered N-polyheterocycles


Background: Due to significant biological activity associated with N-, O- and S-heterocycles, a number of reports for their synthesis have appeared in recent decades. Traditional approaches require expensive or highly specialized equipment or would be of limited use to the synthetic organic chemist due to their highly inconvenient approaches. This review summarizes the applications of copper catalysts with the emphasis on their synthetic applications for nitrogen bearing polyheterocylces. In summary, this review article describes the synthesis of a number of five-membered poly heterocyclic rings.

Objective: Nowadays new approaches that employ atom-economical and efficient pathway have been developed. The researchers are following natural models to design and synthesize heterocycles. The transition metal catalyzed protocols have attracted the attention as compared to other synthetic methodologies because they use easily available substrates to build multiple substituted complicated molecules directly under mild conditions. In organic synthesis, constituted by transition metal catalyzed coupling transformations are one of the most powerful and useful protocols. The N-heterocycles are synthesized by this convenient and useful tool.

Conclusion: The efficient and chemoselective synthesis of heterocycles by this technique has appeared as an important tool. This review shows a highly dynamic research field and the employment of copper catalysts in organic synthesis. Several strategies have been pointed out in the past few years, to meet more sustainable, efficient and environmentally benign chemical products and procedures. The catalytic strategies have been the focus of intense research because they avoid the use of toxic reagents. Among these catalytic strategies, highly rewarding and an important method in heterocycles synthesis is metal catalyzed synthesis. 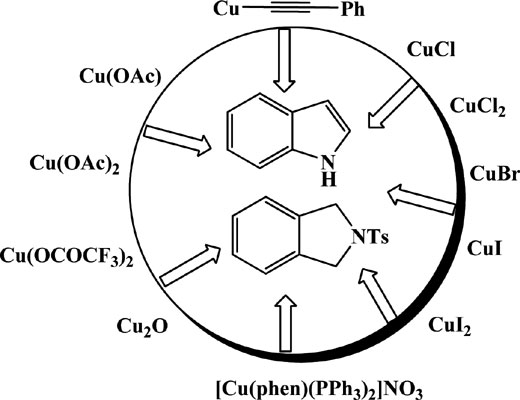