Background: Aripiprazole is a quinolinone derivative. It shows a high affinity for neurotransmitters dopamine and serotonin receptors, which can overcome the blood-brain barrier (BBB) to reach the central nervous system (CNS) to exert therapeutic effects. Its radioiodination may lead to high radiochemical yield and improved its affinity. Aripiprazole radioiodination is an aromatic electrophilic substitution.

Objective: Herein, we investigate the favorable atom site of the aromatic electrophilic substitution of aripiprazole by calculating the Fukui indices of heavy atoms and ESP charges of the parent molecule.

Methods: The calculations have been carried out at the B3LYP/LanL2DZ level of theory. The iodinated aripiprazole structure is confirmed by comparing the experimental and the predicted 1H NMR chemical shifts of the parent molecule and its iodinated forms.

Conclusion: This may explain the higher affinity of iodinated aripiprazole and the increase of its radiochemical yield. 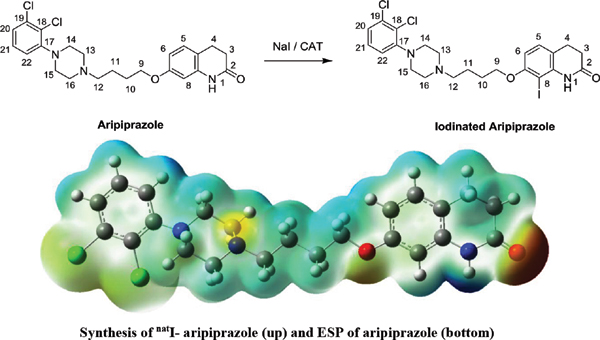