Background: Pyranoid spirofused sugar derivatives represent a class of compounds with a significant impact in the literature. From the structural point of view, the rigidity inferred by the spirofused entity has made these compounds object of interest mainly as enzymatic inhibitors, in particular, carbohydrate processing enzymes. Among them glycogen phosphorylase and sodium glucose co-transporter 2 are important target enzymes for diverse pathological states. Most of the developed compounds present the spirofused entity at the C1 position of the sugar moiety; nevertheless, spirofused entities can also be found at other sugar ring positions. The main spirofused entities encountered are spiroacetals/thioacetals, spiro-hydantoin and derivatives, spiro-isoxazolines, spiro-aminals, spiro-lactams, spiro-oxathiazole and spiro-oxazinanone, but also others are present.

Objectives: The present review focuses on the most explored synthetic strategies for the preparation of this class of compounds, classified according to the position and structure of the spirofused moiety on the pyranoid scaffold. Moreover, the structures are correlated to their main biological activities or to their role as chiral auxiliaries.

Conclusion: It is clear from the review that, among the different derivatives, the spirofused structures at position C1 of the pyranoid scaffold are the most represented and possess the most relevant enzymatic inhibitor activities. Nevertheless, great efforts have been devoted to the introduction of the spirofused entity also in the other positions, mainly for the preparation of biologically active compounds but also for the synthesis of chiral auxiliaries useful in asymmetric reactions; examples of such auxiliaries are the spirofused chiral 1,3-oxazolidin-2-ones and 1,3-oxazolidine-2-thiones. 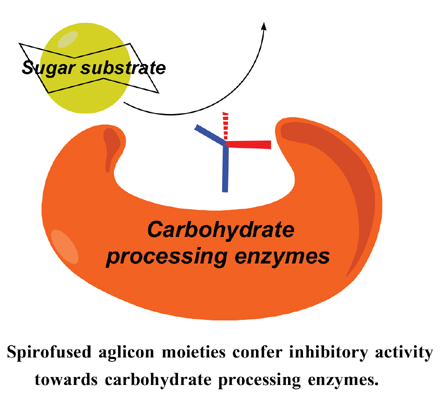